Tomorrow will mark two weeks since the tragic earthquake that has devastated the greater south of Haiti.  Since we last wrote the number of people who have sadly died in this disaster has now surpassed 2,200, with over 12,000 injured and over 800,000 people affected.  Our thoughts and prayers remain with all those whose lives have been impacted.

As we reflect on the last few weeks, I’d like to start by saying a huge and heartfelt thank you to everyone who has joined with us, praying or supporting our efforts in Haiti since 14th August when the earthquake struck.

Thanks to your support we’ve been able to partner with one of our local Haitian partners, The Baptist Convention of Haiti (CBH), who through their network of Haitian churches and your generosity have been able to provide emergency food aid and hygiene kits to 1,300 people impacted by the earthquake.  Just yesterday we received updates and these images of CBH starting their emergency distribution, supporting 600 people in an area that has struggled to receive adequate aid.

We’ve also been working with our partners Walkabout Foundation through our HHA Walkabout Wheelchair Distribution Centre, to secure 80 wheelchairs for those impacted by the earthquake, with another shipment due in September.  Today, 30 of these life-transforming wheelchairs will go to one of partners in southern Haiti, St Boniface Hospital, who have been doing amazing work at the forefront of the health response.

We have remained in regular communication with groups like St Boniface in the last few weeks regarding whether our partner hospital, HCBH, will be needed to offer additional bed space for victims of the earthquake. At the moment it seems unlikely that this will be required though we will continue to monitor the situation day by day and are grateful for our Haitian team who are ready to respond as needed.

In the coming weeks we will continue to monitor the situation closely and respond as we’re able. As we experienced following the 2010 earthquake, the road to recovery will be long and not without challenges.   If you would like to support our efforts, you can click here to donate online.

Whether it be through offering our support to the south or continuing our long-term life-saving work in the north, HHA remain as committed as ever to Haiti’s future and we’d ask you to continue standing with us.

With much love and thanks,

Thank you to everyone who has reached out with their prayers and support this week. We really appreciate you standing with Haiti at such a difficult and tragic time.
Since our last update the death toll of Saturday’s earthquake has sadly reached 2,189, with over 12,000 injured and hundreds still missing.  Some reports state that over 1.5million people have been affected, including over 500,000 children. Tropical Storm Grace hit Haiti on Monday and Tuesday, bringing strong winds and rain to the earthquake affected area, impacting tens of thousands of families left homeless and making access to impacted areas even harder.  In response, the HHA team have been busy this week coordinating our efforts around the following areas:
INCREASING REHABILITATION CAPACITY:
With the number of trauma cases increasing daily, many people will need long term rehabilitation and spinal cord injury care, alongside assistive devices.  We have been working hard to increase our rehabilitation inpatient capacity at our partner hospital in Haiti by an additional 15-20 beds and are on standby with partners in the south for possible referrals. Similarly to the 2010 earthquake, referrals can take time with a host of challenging obstacles to appropriately identify, stabilise and transfer patients, but it is important we are prepared for an additional influx of rehab patients in the coming weeks.
WHEELCHAIR DISTRIBUTION:
Alongside this, the HHA Walkabout Wheelchair Distribution Centre, that we manage with Walkabout Foundation, has agreed to send 80 wheelchairs to partners on the frontline, to support their rehabilitation efforts. An additional shipment of wheelchairs is due in September and will further help the effort.
FOOD & WATER RATIONS:
We are now partnering with The Baptist Convention of Haiti who are coordinating a local effort to send and distribute food, water and hygiene kits to about 3,000 people in some remote areas that are currently not receiving aid.  We have been encouraged and humbled by this locally led effort, which also includes local churches in northern Haiti gathering donated supplies from their congregations. We will be helping to sponsor this effort and would welcome donations towards this distribution in the coming few days.  This aid will be transported down south early next week.
We are also awaiting further news from our friend and partner Sibille, who is carrying out a rehab related needs assessment in southern Haiti today and tomorrow. Please remember her in your prayers.
If you would like to make a donation towards our efforts, click here to donate online.
We will keep you updated in the coming days...
Carwyn, CEO/Co-founder HHA

At time of writing, Haitian authorities have reported 1,297 people have died and it's estimated over 5,000 have been injured, though there are fears the true figure could be much higher. While on-going assessment of the region continues, it is currently reported that at least 7,000 homes have been destroyed with thousands more damaged, alongside health facilities, schools, churches and other infrastructure. This latest, tragic disaster comes following several years of instability, including the recent assassination of the President and amidst fears of Tropical Storm Grace due to hit Haiti later today. Needless to say, we call upon our supporters to stand with Haiti in your thoughts and prayers at this time.

Our team and hospital in northern Haiti are safe and actively working with the authorities and our partners across Haiti to determine how best we can help. As many of you will remember, HHA were heavily involved in responding to the 2010 earthquake including starting our spinal cord injury (SCI) rehabilitation unit to care for persons left completely or partially paralyzed from the disaster. Over the last few days I have been in regular contact with Dr Paul Toussaint, the medical director at our partner hospital, HCBH. Dr Toussaint says the situation is critical, describing a host of needs including medical aid for hospitals that are overwhelmed in the south.

We are currently working with HCBH to prepare for any referrals that we may receive, reviewing how the HHA Walkabout Wheelchair Distribution Center may assist with wheelchair support and connecting with partners in the south to offer other health or disability related support. Tomorrow, Sibille (our Swiss Paraplegic Foundation partner at HCBH) will be traveling to the south west with the charity 'Humanity & Inclusion' to assess the situation further and help advise HHA’s next steps.

Thank you for your continued prayers and support and we will keep you posted as the situation evolves.

We are seeing reports around the world confirming that nearly 1,300 have been confirmed dead in Haiti  following the tragic earthquake at the weekend. Further reports state the quake destroyed 13,694 homes and damaged another 13,785. The destruction has also pushed hospitals to the brink and blocked roads that would carry vital supplies.

The earthquake is just the latest challenge for this struggling country, which is still dealing with fallout from the 2010 quake,  the assassination of President Jovenel Moïse last month, continued gang violence and political unrest. Our hearts break for all the challenges and loss Haiti has faced.

Adding to this devastating news, Tropical Storm Grace is also heading towards Haiti and due to hit Monday or Tuesday. Please continue to stand with Haiti in the coming days with your prayers and support.

Following our earlier news update, we are grateful for those who have reached out offering their support and prayers.

A 7.2 magnitude earthquake struck south west Haiti this morning, followed by a 5.2 magnitude aftershock and several additional smaller shocks.  Through the course of the day it has emerged that at least 227 fatalities have been confirmed, according to Haiti’s Office of Civil Protection (though many fear this figure will increase significantly), with enormous damage reported and high casualties anticipated across the greater south.  The US Geographical Survey issued a ‘red alert’ for the disaster, estimating fatalities could stretch into the thousands.  It stated that ‘past red alerts have required a national or international response.’  Haiti’s Prime Minister has declared a state of emergency for one month though the full extent of the emergency is still being assessed.

Our Medical Director in Haiti has described the situation as critical, emphasising the need for medical reinforcements and other humanitarian aid. He has been in touch with the relevant authorities including WHO, offering our partner hospitals support to the disaster response, including the possibility of supporting patient referrals to our facility, as we did after the 2010 earthquake.  We will continue to assess the situation which will likely become clearer in the next 24-48 hours and we will provide further updates in due course.

Adding to this devastating news, Tropical Storm Grace is also heading towards Haiti and due to hit on Monday evening/Tuesday morning. Please continue to stand with Haiti in the coming days with your prayers and support.

As some of our supporters will have heard by now, it is with great sadness to report that earlier today (Saturday 14th August) Haiti suffered a major 7.2 magnitude earthquake about 150km west of Port-au-Prince in South West Haiti, followed by a 5.2 magnitude earthquake also in the South West.  It is still too early to know the full extent of this tragic news, though early reports indicate significant damage in the greater south.  A tsunami warning has been issued for Haiti following the earthquakes.

Our partner hospital is based in North Haiti where there has currently been no reported damage from the earthquakes.  We have checked in with our team who are all safe and well.

However, we would ask that you join with us holding Haiti in your thoughts and prayers.  We will be monitoring the situation very closely in the next 24 hours and keeping in regular communication with our local team to see how HHA may be able to assist.  We will keep this page updated in the coming days with live updates as things develop and are grateful for your support and prayers at this time… 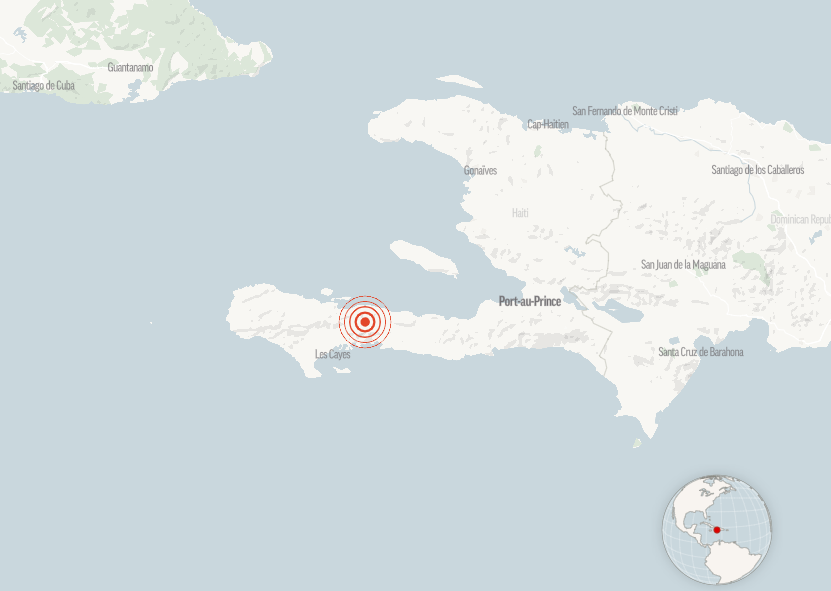